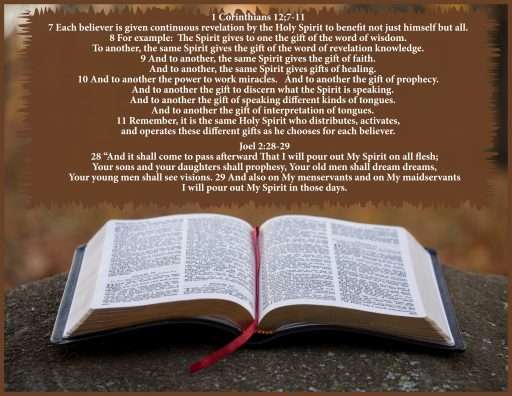 All of these three are ways that God speaks to and through his people.  In the Old Testament we mostly see prophets and priests speaking to His people.  In the New Testament, the Lord opens the doors for many to be able to be used by God to minister to His people.  Anyone who walks in these giftings and callings must be committed to holiness and purity in his or her gifting.

Our Friday prayer group have sought the Lord for several years, flowing with Him in praise, worship and prayers.  He has responded to us many times over these years.  The writings below are some of the anointed Words He has given different ones of us in our prayer time.  Though some were specific to our group, there were many that the corporate Body of Christ can receive.

[The following prophetic word was given May 25, 2019 concerning forgiveness and emotional healing]

14 “If you forgive those who sin against you, your heavenly Father will forgive you. 15 But if you refuse to forgive others, your Father will not forgive your sins.”

The way out of being a victim is forgiveness. That releases you from their bondage and allows the Lord to heal and cleanse the areas that have been misused, whether physically, emotionally or mentally.  Also those things that have been stolen from your life can be restored by forgiving the debts and allowing God to be your source.  Sow seeds of forgiveness to receive the reward from the Father.

[Word given June 14, 2019–though this word was for our group specifically, there are others who are in the same situation.  You are part of a prayer team, worship team or whatever.  This is how God works in His children who team up for His sake.  You can receive it too.]

The Father says, “I am making a difference between you”  We are uniquely His.  “No more wandering aimlessly.  I will place your path before you.  Openly you will see it.  Each of you have different paths to take.  Your unity is from Me.  You differences are born of Me.  I will use you corporately to minister differently to a multitude of people.  Your heart-cry for souls has been heard by a grateful Father.  I will both send you forth to minister together and send people to you to minister to.  Many souls will respond to the corporate  anointing I have placed within you.  Resist the wandering heart and press in to unity in the Spirit.  I have called you a a one-heart group.  I love you and am blessing you both as a group and individually.  Watch and see what I am doing.  Join me in it.  I have just begun to use you.  Others will be drawn to you and will join their hearts to this group.  Some will physically come and join.  Others will be heart-joined only and will intercede greatly for what they see in you touches them even though they cannot physically join you.  Rejoice in Me and allow the anointing to fall on you all.”

We were crying out to the Lord to hear what His heart cry was for this season.  We asked Him what he wanted us to do at this time.  What is the Body of Christ to do now? The following was His response to us.

“Come closer to me.  Fill your hearts with My Words.  Rest your weary soul in my presence and allow the fellowship of the Spirit to cleanse the wounds and sorrows of the soul.  Refresh yourself in My Spirit.  Release the revelations of my Spirit in you.  Break up the hard ground in your barren fields.  Plant the truth of My Word in those fields.  Water them with the flowing oil and water of my Spirit.  Continuously declare my heart to those around you. Speak boldly in your private chamber all the love we share.  Allow us to release Our presence and will in your surroundings.  There are many you are touching in My Name.  I am releasing greater power to reach more.  Rejoice in Our Presence.  Rejoice in seeing souls saved, lives redeemed and those who are running from Us now running to Us.”

“I didn’t call you to manage people.  I called you to crush demons and manifest My power”

We had been in deep intercession and prayer.  Also in repentance for dead works, walking in fear in areas rather than in faith.  We were crying out for God to free us of anything that was a hindrance to His work in the Body of Christ. Molly had a vision and then the Lord started given a powerful Word for the Body of Christ.

The vision was a lion, resting on his side, licking his lips fully satisfied with life and not willing to go after prey.  Then the Lord gave this Word:

“My body has grown fat and satisfied having picked clean the bones of other members of the body.  Mocking their sin, pouring out vile accusations to the world by TV, Facebook and emails.  All the filth they think they see, never looking inside the hearts and souls of the wounded.  Never bothering to pray and ask Me what My answer to their need is.  Stop devouring each other!  Cover the sinner-pray and ask Me for strategies in prayer and actions I require of you.  Seel My Word for my ways of dealing with wounded members of My body.

“Allow me to fill your mouth with exhortations and blessings.  Exhort them with the Word and bless them with my anointing and balm for forgiveness and deliverance.  Then you will see them set free and restored.  I have never assigned My people to be judge over My people.  I am the only one who has that right, and I choose mercy and grace instead.  Release My Spirit to woo, to convict and restore.  Be a co-laborer with Him.  Yeah, I will anoint you for that.  I will bless that assignment.  I will increase your anointing to do that as you join with Me to prepare the Bride for My coming.”

[I meditated on the word judgement there.  I know we are not to judge others as we will also be judged.  On the way to church, He revealed a deeper meaning to me.  We are to assess each situation through His eyes.  What is truly going on?  How am I to respond, or am I to respond other than prayer?  Our judgement part is over the situation, not the people.  We are not to celebrate sin, rather to love the sinner.  (Molly’s thoughts)]

[I, Molly, have had a couple of dreams that are meant to bless the Body of Christ]

I was in a house looking out a window and saw a large wad of snake.  There was no way to tell where one snake started and the other ended.  I was startled and yet could not look away.  While I watched, one of the snakes reared up and started eating the others.  It was so gorey, I looked away.  When I looked back later, there were only 4 snakes left.  As I watched another large different variety of snake was coming across the yard toward the house.  As it reached the wad of snakes, it started eating the last remaining snakes.  When I looked again, there was only one, flattened, dead snake left!  All the rest were devoured.

I woke up and asked the Lord what this dream meant.  He told me to analyze what I saw.  I saw a window, lots of snakes and them grossly eating each other.  He then revealed these things about the dream.  I was safe in the house.  I only observed the snakes and their deaths.  Lastly, they devoured each other.  I was seeking the destruction of my enemies, but I had to do nothing.  They destroyed each other!  Praise God.  I believe lots of you are going through enemy attacks.  The Lord is saying, stay close to Him, and you will see your enemies destroyed in front of your eyes.

In the next dream, I saw a person crocheting a large afghan.  [When I woke up, I thought the person was female, but as I rehearsed the whole dream, there was no indication of what the person looked like accept for the hands, and lap, it could have been a man.]  The skein of yarn was dangling off of the crocheted piece on the floor in front of them.  To the right side was a cat and her kitten,watching.

All of a sudden, the kitten leaped onto the skein of yarn on the floor and got all tangled up in it.  I heard the person crocheting the afghan, chuckling at the antics of the kitten.  They picked the kitten up, unwound it from the tangled mess it had made, put it on the ground and the kitten scampered off.  The person picked up the afghan and started back to work.  The cat, who had been observing the whole scene, suddenly leaped into the skein on the floor.  She got so entangled that she started panicking and fighting to get out of the mess she had made.  The yarn started getting pulled out of the work already done.  The person doing the crocheting, tried to pick up the cat to calm her down.  She was hissing, biting and scratching in her panic.  It took a forceful hold to calm her down enough to set her free.  The afghan was damaged in the fight.

I woke up and asked the Lord to reveal the hidden truths there.  He told me the mistakes and entanglements from youth  can sometimes be released easily.  The person may not be harmed or permanently entangled.  It even has some humor as others watch the antics.  But in a fully grown adult, who has already seen what such entanglements can do, to leap into the traps anyway is much harder to fix.  The adult has more strength to resist help, they are more likely to hiss, bite and claw at anyone who wants to help them. He also said they are damaging their future in these entanglements.  He was so fierce in the tone of voice He spoke to me with.  He said, “It was Me, who is creating your life.  The afghan is all that I have already created.  The skein of yarn is what is yet to come.  By entangling yourself in things, you already have seen to be bad, you are tearing at the framework of your own future. [ The cat torn up the work already done on the afghan.] I will get you out of these entanglements, but with your own faith and help.  I will no longer do it all for you.”

It was a very sobering dream.  How many of us keep trying to get to the edge of God’s grace in our lives.  We know what we are doing is not good for us, yet we keep edging closer to it.  God help us all break before Him with a repentant heart and ask for forgiveness for rebellion and selfishness.